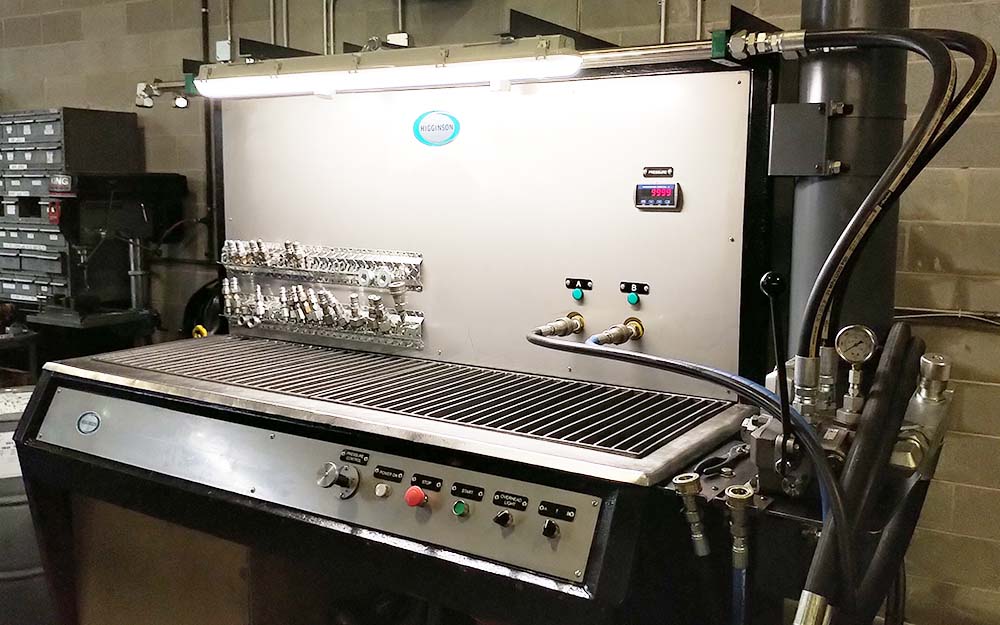 Reduce, reuse, recycle. The Three R’s are synonymous with environmental protection, ameliorating the need to manufacture finished goods from resource-intensive raw materials. Consumerism is, indeed, the enemy of a green planet, so if you can reduce your consumption, reuse old items or recycle others, you eliminate much of the carbon footprint while simultaneously limiting the growth of landfill sites.

We had the opportunity to reduce, reuse and recycle hydraulics here at Higginson Equipment. We have an ancient test stand kicking around, which was likely state of the art when someone manufactured it decades ago. Employing thirty horsepower to power a fixed displacement vane pump, our old test stand did the trick but was challenging to use. Its lever-operated directional valve was actually mounted to the back of the panel and used a set of levers attached to a rotary dial mechanism on the front. This dial, and I kid you not, used a door latch to hold itself in place since designers ordered no detent function for the valve.

The bones of the test stand were fine, such as the reservoir, electric motor and the drain table. We had already upgraded the flow capacity by adding a 15-gallon piston accumulator, capable of 60 GPM for short bursts. But the whole unit was only operating at 3000 PSI or less, and we’re in the business of high-pressure hydraulics, so we upgraded it to handle 5000 PSI with a 28cc Hengli pressure compensated piston pump.

Next, we obsoleted the lever valves, mirroring what occurs all the time in every industry. We installed a Hengli D05 electric solenoid valve and added panel mounted switchgear to control work port functions. The spool is a float centre, meaning the A & B ports drain to tank while the P port remains blocked in neutral. This configuration allows the hoses to drain when the toggle switch is centred. Our old valve had a closed centre spool, so we had to turn off the pump and jog the lever valve handle to drain the lines back to tank, allowing easy and safe removal of the quick couplers.

The old unit had questionable filtration. The return filter was a giant contraption just as old as the power unit, with a broken bypass indicator and a worn-off part number. It was likely bypassing, leaving fluid to run straight through unfiltered. A large pressure filter off the pump at least had its part numbers intact, but its bypass indicator was also broken. Both filters were replaced by high-efficiency units from Steed Machinery and spec'd with visual indicators and electronic pressure switches. Lights on the front panel will inform the technician when the filter elements are 60% clogged, leaving no opportunity to bypass dirty fluid.

After a thorough cleaning, including inside the reservoir where plenty of sludge rested on the bottom, we refinished the entire unit with new paint. The control and back panels look great with new stainless steel panels laser cut to perfectly match the accessories and ports mounted on its face. We didn't spare any expense in the upgrade, but because of the marvellous structure we had to work with, we saved half the cost compared to a new unit while also keeping hundreds of pounds out of the dumpster. This unit will replace our current portable power unit, while providing superior performance and functionality.